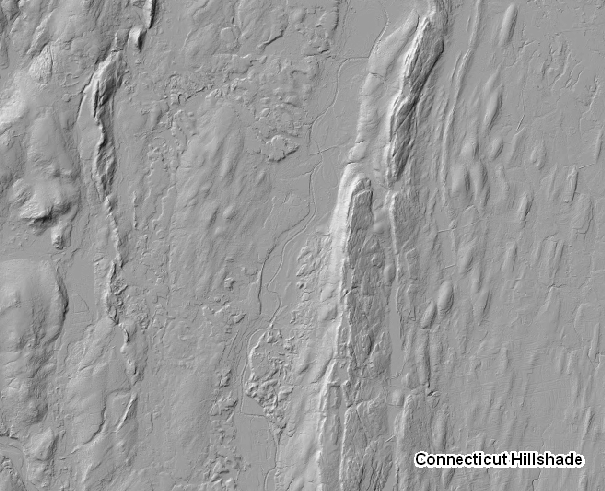 Hillshade 2000 generates the appearance of a three-dimensional representation of terrain by placing shadows cast on high ground as if sunlight is shining from the northwestern direction. As a result, the northwestern side of elevated areas is intentionally lighter in color than the southeastern side. Relatively flat areas are not shadowed and appear smooth, whereas steeper slopes appear rough with the southeastern side appearing darker in color. This hillshade information for Connecticut was obtained from the University of Connecticut, College of Agriculture and Natural Resources, Center for Land Use Education and Research (CLEAR). CLEAR derived this information from point elevation data for Connecticut that was captured in 2000 using Light Detection And Ranging (LiDAR) technology.

This information is used to represent the general shape of landforms such as hills, valleys and ridges and is useful in cartographically illustrating geomorphic patterns, hydrologic (stream) networks, drainage patterns, etc. This hillshade information is best used for regional analysis and not intended for use at detailed scales or to determine the exact elevation at a particular location.

This information may be incorrect in some areas due to gaps in the underlying point elevation LiDAR data used to generate the hillshade effect. When displayed at a detailed map scale, the hillshade will appear discontinuous in areas where information is incorrect, and linear breaks in the hillshade become apparent in areas where there are errors in the underlying elevation data. Due to these anomalies and inconsistencies, use caution when viewing and analyzing this informaiton.

Also, the location and shape of features in other GIS data may not exactly match the elevation suggested by the hillshade primarily due to differences in spatial accuracy and data collection dates. For example, a stream in the 1:24,000-scale Connecticut Hydrography data from CT DEEP may not line up exactly with the inferred stream bank suggested by the hillshade information. Their location and shape are bound to be different because information such as hydrography compiled from older 1:24,000-scale USGS topographic quadrangle maps, lacks the spatial accuracy of and is less current than the elevation data captured in 2000. 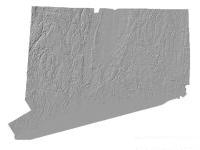