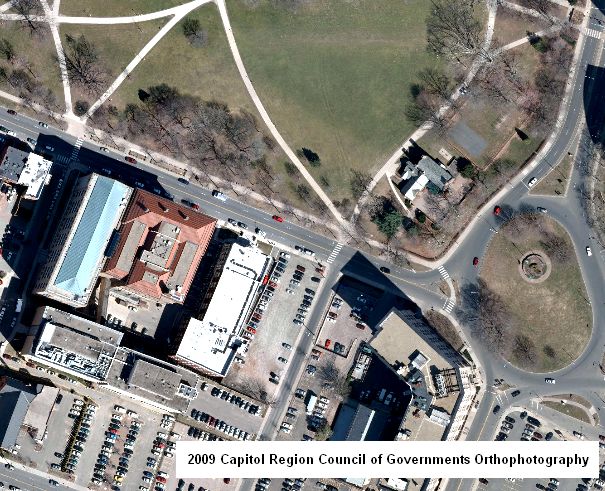 In 2008, the Capitol Region Council of Governments received approval for a Regional Performance Initiative (RPI) grant from the Connecticut Office of Policy and Management to acquire orthophotography. The RPI grants are designed to take advantage of economies of scale that can be realized by regional cooperation and coordination of projects in Connecticut. The RPI grant funded the aquisition of 2009 orthophotogy for the entire Capitol Region and the Town of Plainville, for a total of 30 municipalities. Several additional municipalities also contracted with the vendor to acquire orthophotography at reduced cost due to the size and coordination of the flight. The project was managed by CRCOG, with generous assistance from municipal GIS professionals in the region. In particular, the task of reviewing the quality of the orthophotography produced by the vendor was completed by CRCOG staff and these municipal GIS professionals.

This is ideal for identifying features on the ground surface in developed, open, and even wooded areas because leaves on trees and shrubs that normally obstruct the view from above are largely absent. For example, features such as stone walls, dirt roads, and other structures in wooded areas are usually visible and identifiable. Areas of deciduous verses coniferous trees are apparent.

The location and shape of features in other GIS data may not exactly match information shown in the 2009 aerial photography primarily due to differences in spatial accuracy and data collection dates. For example, a stream in the 1:24,000-scale Connecticut Hydrography data from CT DEP may not line up exactly with the watercourse shown in this 2009 aerial photography. Waterbody shorelines defined in hydrography GIS data were compiled from information depicted on older 1:24,000-scale USGS topographic quadrangle maps and lack the spatial accuracy and currency of the the waterbodies depicted in this more recent aerial photography. 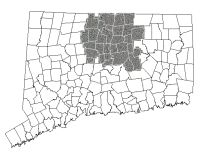