Connecticut Environmental Conditions Online
Maps and Geospatial Data for Everyone

In case you missed it earlier (because this is important stuff), the imagery was paid for through a partnership between Connecticut Department of Emergency Services and Public Protection (DESPP), the Connecticut Department of Transportation (DOT), and the National Geospatial Intelligence Agency (NGA) along with the United States Geological Survey (USGS) providing support through project management, contracting and quality assurance/quality control (QA/QC).

In 2010, the CT Geospatial Information Council began working with USGS to capture statewide, high resolution aerial imagery for the state.  In March of 2011, DESPP and DOT signed Memorandums of Understanding and Joint Funding Agreements with USGS to procure the flight for spring 2011.  Unfortunately, the late snowfall shrunk the window of opportunity for a spring data capture (time between snow melt and leaf out) so much that the flight had to be postponed to either a fall 2011 or spring 2012.  With guidance from the Geospatial Council and others involved, DESPP and DOT decided against a fall 2011 flight in favor of spring 2012.  The weather cooperated and the imagery was captured through the USGS project vendor, Photo Science Corporation, between March 18 and 30, 2012. 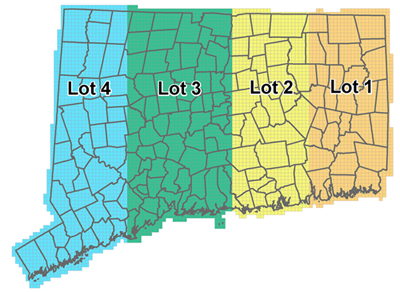 In the fall of 2012, Photo Science started data delivery of the raw imagery and orthoimagery to USGS for QA/QC.  Lot 1, the Eastern most quarter of the state, was the first delivered on Oct 1, 2012.  The data was copied to CT ECO and processed to create a map service of Lot 1.  Lot 2 was delivered on November 1, 2012 and was added to the CT ECO map service.  Lot 3 was first delivered on December 7, 2012 and Lot 4 on January 8, 2013.  As the final processing for the CT ECO map service was being performed, we discovered some discrepancies that were brought to the attention of Photo Science.  They fixed the problem and delivered, for the second time, Lots 3 and 4, or the western half of Connecticut on February 1, 2013.

How is the Imagery Being Served?

Esri's Mosaic Dataset and ArcGIS Server.  A Mosaic Dataset is a collection of images stored as a catalog (the catalog points to the images) and viewed as a mosaicked image that is dynamic.  The Mosaic Dataset uses overviews (reduced resolution datasets) to draw the imagery quickly at all different scales.  All of the tiles were added to the Mosaic Dataset.  Processing involved creating tile footprints where the background (no data) areas were removed from the footprints.  In several cases, the sliver of real data was so small compared to the size of the almost completely no-data tile that the small area had to be subset (clipped) and re-added to the mosaic dataset.  Several tiles delivered had no data at all and were completely removed from the mosaic.  The next step was to create those overviews.  It took about 34 hours and created 150Gb of overview images for this gigantic mosaic dataset.  Finally, an image service was created and served to all you fine people.

These folks were instrumental in getting the funds and making the acquisition happen. Thanks to Dan Czaja (DESPP), Jim Spencer (DOT), Lin Neifert (USGS), Tyler Kleykamp (OPM).

Questions or comments about CT ECO and the imagery, email Emily Wilson or CLEAR at clear@uconn.edu.