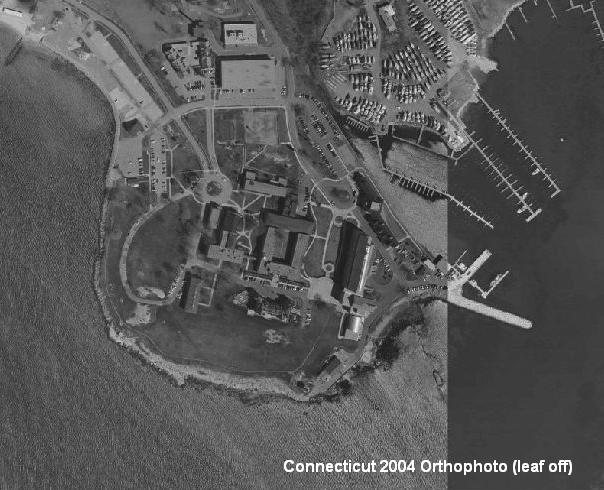 Connecticut 2004 Orthophotography is a statewide aerial survey of Connecticut for 2004. The photographs are black and white and taken under clear sky conditions when deciduous trees and shrubs are in leafless condition ("leaf off") and the ground is free from ice, snow, cloud shadows, and floodwaters. This type of black and white, leaf-off photography is captured during the early spring immediately after snow cover melts and before stream levels rise and leaves blossom. The spring of 2004 was particularly wet, making it extremely difficult to arrive at conditions ideal for conducting a statewide aerial survey. In certain regions of Connecticut during the Spring of 2004, stream levels were high and deciduous trees exhibited significant leaf growth that covered the view of the ground from above. As a result, aerial photography from 2000 and 2005 aerial surveys was substituted in areas of Connecticut where the quality of the Spring 2004 photography was unacceptable. The ground resolution for this imagery is 0.8 feet per image pixel.

Orthophotography combines the image characteristics of a photograph with the geometric qualities of a map. Orthophotographs have been geometrically corrected, or "orthorectified" so that the scale is uniform and distortion is minimal. Thus, orthophotographs can be used to measure distance because they have been adjusted for topographic relief, lens distortion and camera tilt. These orthophotographs serve a variety of purposes, from functioning as a cartographic base to supporting identification and mapping of habitat areas by interpreting the aerial photography. This particular aerial survey is ideal for observing features on the ground surface in developed, open or wooded areas because leaves on trees and shrubs that normally obstruct the view from above are largely absent. For example, features such as stone walls, roads, and structures in wooded areas may be observed. Display orthophotography in the background when viewing soils, geologic, hydrologic, and other natural resource information. The shade-of-gray nature of black and white aerial photography make it an ideal backdrop for more colorfully shaded information such as wetland soils, for example.

Unlike other statewide aerial surveys of Connecticut that cover a single time period, the 2004 aerial survey is actually a mosaic of photography from three different years. Mostly from the spring of 2004, photographs taking during the spring of 2000 and 2005 were introduced to improve image quality. The date of the photography varies depending on the area observed. Some areas observed may include photography from more than one year and it may not be readily apparent unless obvious differences can be observed. For example, a new residential development may appear on a more recent photo and not on an earlier photo adjacent to it. Depending on the extent of change over time, there may or may not be an obvious difference between areas of older and newer photography. As a reference to photo dates, a photo index for the 2004 statewide aerial survey is available that includes a photo center-point location with the date for each photograph used in the aerial survey. This photo index is available from the Connecticut Department of Environmental Protection.

The location and shape of features in other GIS layers will not exactly match information shown in the aerial photography primarily due to differences in spatial accuracy and data collection dates. For example, the location of a shoreline in a dataset such as soils compiled at 1:12,000 scale or the course of a stream in hydrography data compiled at 1:24,000 scale may not line up exactly with information displayed in the 2004 orthophotography. Their location and shape are bound to be different because information compiled on older 1:24,000-scale USGS topographic quadrangle maps, for example, lacks the spatial accuracy and recentness of the 2004 orthophotography. 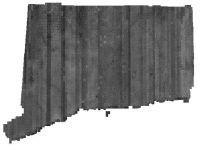